Thinking about the theme of this MF, I wondered: What if Lausanne ’74 hadn’t happened?

Without Lausanne ’74, what might or might not have happened on the global level? With no Lausanne Covenant, would there be even less unity in the Church? Even less progress on social and justice issues for the poor? Less cooperation and understanding across cultures?

On a personal level, if Ralph Winter had not presented the vision for reaching the unreached at Lausanne, my life would have been very different.

I first heard Winter share that same vision at a weekend event for students, two years after he and Roberta returned from Lausanne. The Winters were days away from founding the U.S. Center for World Mission1—in part, because of Lausanne. A good friend (Doug) and I mobilized 25 college students to this event. We had a growing conviction that the task of reaching people with the gospel was something every Christian must be engaged in. We wrote a mission-focused newsletter for the church’s quarterly mailing. We read books and attended anything that might help us learn more about what was happening around the world. We were thrilled when we got our hands on the first U.S. edition of Operation World that same year—which detailed every country of the world and gave praises and prayer requests. We prayed.

But we had not heard or understood the concept of distinct cultural groups who were beyond the scope of the existing church mission efforts. Most alert Christians at the time knew there were Christians in every country of the world. But that did not solve the problem Winter spoke about. Doug and I learned, that even if every church in the world were to reach out as far as it could in every direction, more than one half of the world would remain untouched. Winter talked about Muslim, Hindu and Buddhist peoples and showed —on overhead transparencies—how few people were trying to reach them. He talked about “people groups” where there were no churches.

Doug and I just sat there stunned. Why hadn’t we heard this? Leaving that weekend event, we were even more motivated to get involved because the “task” Winter portrayed seemed doable. Doug became one of the earliest Perspectives coordinators. I joined Winter at the USCWM and have been there since.

So...What if Lausanne hadn’t happened? Humanly speaking, I would suggest we would have less hope.

When Doug and I first heard Ralph Winter, we knew enough about the world to see massive needs, but we didn’t understand the complexity. It was just a HUGE task. Lausanne helped us to see and gave the evangelical church mission world hope. “Bite-sized groups” of people seem more reachable, even if many of them are still radically different from us, and the task will require sacrifice. 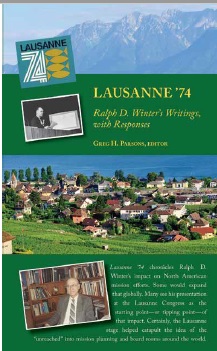