The Voices of Practitioners

The Ears of Mission Exectutives

At the beginning of the new millennium Rick Love and other young leaders reflected on the Apostle John’s vision of the Lamb who with his blood “purchased for God persons from every tribe and language and people and nation” (Rev. 5:9 NIV). And they convenanted to cooperate, by God’s grace, to see effective efforts to plant fellowships of Christ’s disciples in every Muslim people group.

A lot had happened since the Glen Eyrie Consultation in 1978 which produced The Gospel and Islam (ed. McCurry, 1978). With the absence of significant numbers of converts from Islam in 1978, the writers of the conference papers were primarily scholars who drew insights from church growth and anthropological studies among non-Muslim people groups coupled with Scripture to suggest practices that gave promise to be fruitful among Muslims. These insights were developed further by the Muslim Track of the Lausanne Committee for World Evangelization in consultations in Pattaya in Thailand,1 Zeist in Holland,2 and Manila. Meanwhile Muslims began to follow Jesus in increasing numbers; so there were many practitioners with first-hand experience of planting churches among Muslims who could see what God was blessing.

The young leaders who had covenanted to work together towards the planting of fellowships of Christ’s disciples among every Muslim people group then took concrete steps. One initially was for 13 mission agencies comprised of 5,800 workers to pool their research. This involved updating existing information on the Muslim Unreached People Groups3 by on-site surveys over a three to four year period. And it meant sharing and comparing a list of practices of the 13 agencies to seek to discern “fruitful practices” that God had blessed in planting churches, that reproduce. This was done with appreciation for the mystery of the blending of the divine and human in Paul’s words: “I planted, Apollos watered, but God caused the growth” (I Cor. 3:6, NRSV).

A multinational consultation was scheduled in Thailand for March of 2007 for nearly 500 participants, with two tracks. A Fruitful Practices track led by Steve Holloway was for field practitioners so that practices could be developed from experience not theory. The other was a Global Trends track to ascertain the task ahead and present it to invited mission executives who could cooperate in assigning personnel and resources toward accomplishing it. The practitioners who attended were from 56 organizations and had participated in the planting of 738 churches or fellowships of Jesus-followers among Muslims. They met every day in small groups and evaluated 94 practices that had been highlighted by the original 13 agencies. The practitioners each indicated if they considered a practice important and whether they used it and gave case studies.

Some interesting things came out. Forty percent of the church plants were in contexts that had experienced social upheavals or natural disasters—an observation in line with previous church growth studies. A majority of the plants that gave signs of developing into movements were contextualized to the culture and were planted in preexisting social networks where trust already existed. In these networks discipling began even before people came fully to faith because enquirers felt they belonged even before they fully believed. Far more church plants resulted when planters used the heart language rather than the trade language. Against conventional wisdom, in one area the best context to share faith with women seemed not to be in secret but at parties where women fed on each other’s questions. The moral character of the witnesses was always most important.

The Global Trends Track, led by Jim Haney and others, discussed the state of the gospel witness in every part of the Muslim world in order to help mission executives develop their plans. Patrick Johnstone introduced the designation Affinity Block to refer to the largest clusters of people groups where the gospel can spread without encountering major barriers of understanding and acceptance (e.g., Arab peoples, Malay peoples). These he sub-divided into People Clusters (e.g., Kurds, Berbers). Such designations were designed to facilitate cooperation between mission agencies. The designation “unengaged” people was introduced more broadly rather than the commonly-used “unreached” people descriptor which has at times been hard to define. A Muslim people are considered effectively engaged when there is: 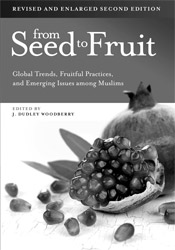 A book was published in 2008 that included the proceedings and results of the consultation, From Seed to Fruit: Global Trends, Fruitful Practices, and Emerging Issues, ed. J. Dudley Woodberry,4 including a CD with updated demographic statistics and other resources. It was expanded in a second edition with additional analysis and an updated CD in 2011, and the demographic material is currently updated bimonthly. The emerging issues with respect to fruitful practices deal with topics such as factors that influence the identity that Jesus-followers choose, factors that facilitate fellowships becoming movements, the oral use of Scripture (since 75% of the practitioners worked with peoples preferring oral learning), and empowering indigenous leaders.

The vision that brought the young leaders together a decade ago still motivates us all—to partner with God so that some day we might join with those from the Muslim community who have decided to follow the Lamb and sing with them “with your blood you purchased for God persons from every tribe and language and people and nation” (Rev. 5:9, NIV).

J. Dudley Woodberry is Dean Emeritus and Senior Professor of Islamic Studies at the School of Intercultural Studies at Fuller Theological Seminary in Pasadena, California. He served with his family at the Christian Study Centre in Rawalpindi, Pakistan, and as a pastor in Kabul, Afghanistan and Riyadh, Saudi Arabia. You may contact the author at .(JavaScript must be enabled to view this email address).