The Global International Student Ministry Movement via the Lausanne Movement

The gradual growth and multiplication of ministries among international students as an emergent movement began in the 1950’s in the United States through independent agencies such as International Students Inc (ISI) and campus ministries like Intervarsity Christian Fellowship. In some European countries, the International Fellowship of Evangelical Students (IFES) recognized similar opportunities.

The next two decades saw steady expansion with additional ISMs birthed primarily by various campus or para-church ministries, and some denominations. The 80’s ushered in two significant elements to the growth and diversification of the movement: the launch of a North American regional ISM network called the Association of Christian Ministries to Internationals (ACMI) and the development of a national ISM in Canada (ISM Canada) and in the United Kingdom (International Students Christian Services, now called Friends International).  These developments were catalyzed by staff from ISI.

ACMI was the product of the vision of Dr. Jack Burke, the International Student Services  Director at the University of Houston who called together the first North American ISM consultation hosted by ISI in 1981.  ISI’s former president, Dr. Hal Guffey, was the visionary who sent two staff couples to Canada and the U.K. to encourage the expansion of ISMs that would equip their churches to engage in ministry among students from abroad.  As an ISI staff member in the 80’s, it was a privilege to be at the consultation that launched ACMI, and to know the couples that went to Canada and England.

Since the 90’s, while the ISM movement has progressed nationally and regionally in North America and Europe, the Asia Pacific region saw ISM growth in a few countries, most notably Australia and New Zealand.  In fact, the Overseas Christian Fellowship began during the late 50s in Australia with students from Malaysia and Singapore, and has sustained an admirable nation-wide ISM movement till this day.

As we entered the new millennia, there was no global ISM network until the Lausanne Movement included ISM in its agenda at a global event in 2004.

In 2001, while I was serving as the president of ACMI, I received a survey from Dr. Peter Brierley, Lausanne Senior Associate for Research, requesting recommendations for strategic kinds of ministries that could be considered as issue topics for the upcoming global Lausanne Forum to be held in Thailand in 2004. Up to that time, ministry among international students had never been on the program agenda of global or regional events sponsored by Lausanne.  I sent a proposal for ministry among “Diaspora” peoples and ISM, and in 2003 I was asked to be the Convener for the Issue Group on ISM. It was comprised of 33 people from 15 countries, and together with the Diaspora Group, compiled the Lausanne Occasional Paper # 55: Diasporas and International Students: The New People Next Door, which is freely downloadable from the Lausanne website: http://www.lausanne.org 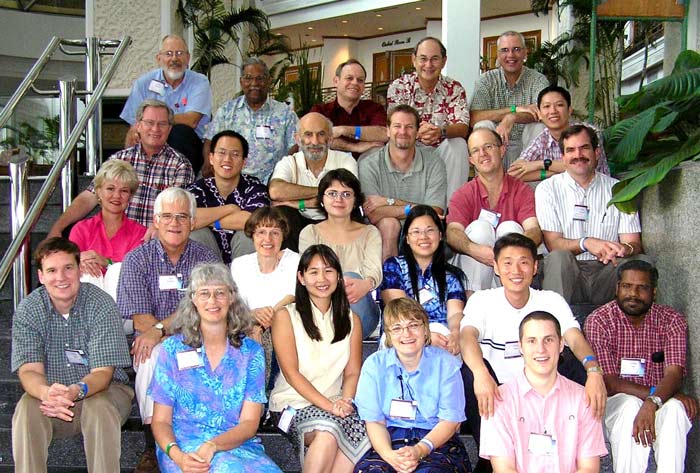 While still serving as ACMI president in 2007, I was invited to join the Lausanne International Leaders Conference in Budapest where the International Student Ministries Special Interest Committee (SIC) was inaugurated, and I was asked to serve as its Chair.  An initial goal was to establish a global network of ISM leaders, and I invited ISM leaders from New Zealand, South Africa, Japan, Singapore, India, Australia, Korea, Poland, and Englandto consider being part of the SIC. From among the ISM SIC, Richard Weston, the former national director of Friends International (U.K), agreed to serve as coordinator for networking ISMs in Europe, while Terry McGrath, the founding director of ISM New Zealand, served as coordinator for the Asia-Pacific region.

Another goal of the ISM SIC was to host regional ISM Leaders consultations in 2009 as part of the preparation for the 3rd Lausanne worldwide congress, Lausanne III: Cape Town 2010.  Each regional consultation identified and addressed ISM issues that were relevant to each region’s context.

Until now, three regions of the world have developed ISM ministries: North America, Europe, and the Asia-Pacific region.  In North America, for 35 years ACMI has held an annual national conference.  Europe has had sporadic regional or national ISM staff conferences for over 30 years as well, hosted by the International Fellowship of Evangelical Students (IFES) and/or Friends International.

Richard Weston directed the 2009 Lausanne Greater Europe Regional ISM Leaders Consultation that was held in Amsterdam, Holland.  About 30 participants came from nearly 15 countries.  An IFES group of participants from Poland later convened a European IFES ISM consultation in 2010 in Poland, and its “fruit” has resulted in an increase of ISM engagement among various European IFES movements. Another regional ISM Consultation was held in Berlin in 2014 and the Czech Republic will be the site for a 2016 gathering.

Several of the ISM leaders who participated in the 2009 regional consultations were asked to report on the ISM movement in their countries at the Cape Town 2010 congress, which had 4,000 evangelical leaders.  The presentations were part of 4 Dialogue Sessions (seminars) on ISM in Europe, Asia-Pacific, North America, and South Africa.  Ministry among International students is included in the Cape Town Commitment.

In 2012 the position or title of “Chair” of SICs was replaced by “Senior Associate,” which has recently been modified to “Catalyst.”  The use of “SIC” was discontinued and has been converted into an ISM Global Leadership Network.  Some of the functions of the Catalyst for ISM include:  advocating for the Cape Town Commitment and its calls to action in relation to ISM; coordinating a global team of ISM leaders/advisors; encouraging emerging younger leaders in ISM (and mentoring 1-2); stimulating biblical and strategic reflection, discussion, and action for ISM; convening ISM international meetings in consultation with other Lausanne leaders; engaging in periodic conference/Skype calls with ISM leaders; and meeting at least bi-annually with other Facilitation Team (Steering Committee) members of the ISM Global Leadership Network.  The purpose of the Lausanne ISM Global Leadership Network is to catalyze ISM development in strategic locations where none exists and to enhance existing ISMs through networking.

Near Future Goals for ISM Globally

2016:  In addition to meetings with European ISM leaders and staff in the Czech Republic, several Lausanne ISM Facilitation Team members will be mentors at the Lausanne Younger Leaders Gathering in Jakarta in August, and then with the World Evangelical Alliance Mission Commission in Panama City in October. The Lausanne ISM Global Leadership Network is an official network of the WEA-MC.  A Lausanne ISM Ghana/West Africa Consultation was held on April 16th with 15 representatives of churches, mission agencies, and academia to explore ISM initiatives.  Plans for a similar consultation are underway for Kenya in 2016.

Gog Bless You, I’m Chris from Liberia and would lover to be a member of this movement

Leiton Chinn has been mobilizing the Church for outreach among International Students for 39 years and currently serves as the Lausanne Movement Catalyst for ISM.  He also advocates for ISM globally as a member of the World Evangelical Alliance Mission Commission and in North America as part of the national teams of the Mission America Coalition and Ethnic America Network.