Longing for the Golden City

How 42,500 Buddhist-Background Believers are Proclaiming the Gospel

The author of this article would like to clarify that this work is C4, and all believers call themselves “Christians” or “Children of God.”

In February 2004 two of my trainees, the Lawyer and the Farmer, started to see a breakthrough among their Buddhist Unreached People Group. Within two months we saw the first seven new churches.  Six  months earlier  we had started a temporary training church  modeled  after what we learned from Dr. George Patterson. This training allowed the Lawyer and the Farmer to develop a Buddhist-friendly style of worship.  I asked, “How can we help Buddhist seekers and Buddhist background believers feel comfortable worshipping Jesus?”2 The  trainees decided to use a Buddhist gyzee bell available on the prayer alter in every  Buddhist  home  in  the  country.3  We adapted its purpose and the gyzee is struck three times to indicate the beginning and end of worship in homes. The trainees adapted the basic outline and terminology of the Buddhist monk’s ordination ceremony to baptism. New believers (novices) are trained in an easily reproducible curriculum we call the Ten  Commands  of  Christ4 and asked if they lovingly commit to obey our Abbot wherever they go. The novices reply with a Buddhist Pali term amabondi (I promise). There is only one Monk—Jesus—whom they bow before.5

When they pray, the believers use the Buddhist term for amen or well done, thadu.6 In Adoniram Judson’s translation of the Bible into Burmese, Jesus uses this word in Matt 25:23, giving precedent for its use.

Rapid obedience to Christ’s commands has led to rapid multiplication of new disciples and churches.7

Sister Than Than’s alcoholic husband left her in 2005 because he found out that she was earning money by way of the oldest profession in the world. When Than Than  traveled  to  the  city  where  the Lawyer and I lived looking for her runaway husband, she heard the gospel, was baptized a week later and was shown a simple model for church. We trained her, shared the vision for a movement and sent her back home. By Christmas 2005, Than Than had started fourteen churches in her area. I asked her how she did this and she was irritated at my amazement. She went on to share her waterfall strategy: “People come to my house on Sunday morning and my daughter Phyu Phyu tells a Bible story using our picture Bible.8 Then the trainees repeat the Bible story back to the group and I ask the four inductive questions.” The last question is “Who are you going to share this story and truth with?” She challenges the trainees to repeat this story at their homes that afternoon. Therefore the Bible flows out of Than Than’s house to the second, third, and fourth generation like a cascading waterfall. Nine-year-old Phyu Phyu is the best preacher in that area out of 200 new house church leaders.

The networks often hold leadership trainings inside monasteries and homes. The Lawyer works with monks on community development projects. A handful of monks have been identified as persons of peace9 who have embraced the Messiah while others have been identified as persons of goodwill.10 A few monks, however, have proven to be strong opponents of the gospel and have driven 300 believers from nine villages. They are jealous of the large numbers turning to Christ and have placed curses on our leaders, which we have  broken.11  We have learned a great deal about handling spiritual warfare thanks to these monks.

Living in an area with one of the lowest cell phone penetrations in the world, our network leaders continue to struggle with lack of communication between mentors. We have sent “runners” with hand-written letters to encourage other leaders and organize future trainings. The house church networks have taken up offerings to build schools, care for children at risk and provide aid in natural disasters and ethnic conflict zones. After cyclone Nargis washed away 140,000 people in May 2008, the movement crossed cultural barriers and spread into the majority people group numbering sixty million Buddhists. 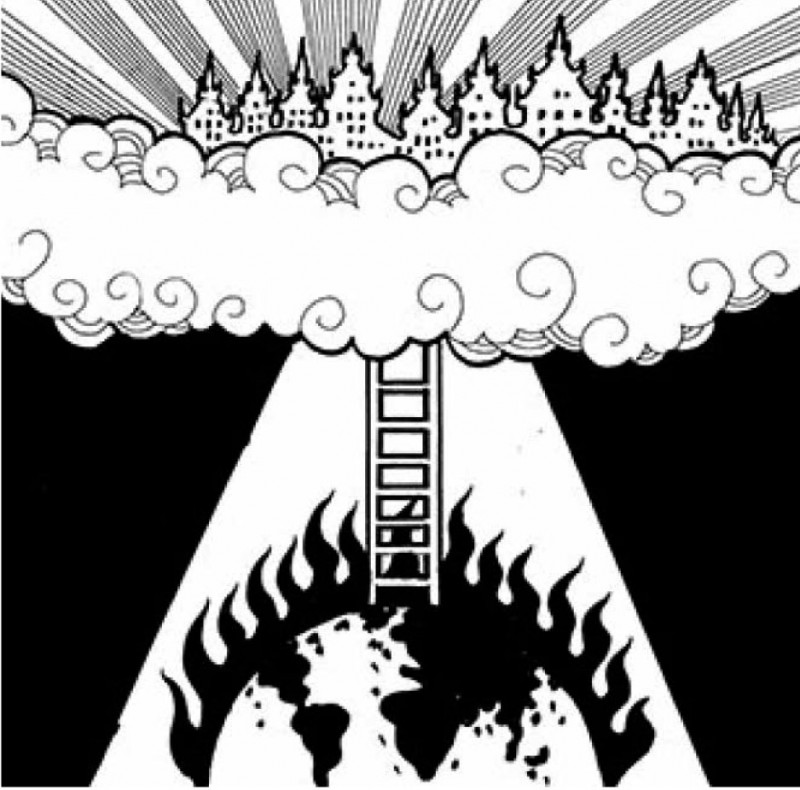 While many cross-cultural workers have developed various methods for sharing the gospel with Buddhists, it is more crucial to identify the barriers.

The Lawyer’s Method
(The Four Noble Truths of Christ)14


Taking these barriers into  account,  my trainee the Lawyer developed a presentation of  the gospel for those who live under the four laws of Buddhism (Four Noble Truths).15 He presents the bad news of Buddha’s law before proclaiming the liberating good news of Christ. Buddhists call this liberation nirvana16 in Sanskrit (nibbana in Pali). The Lawyer proclaims Christ as the way to nirvana. The following is my version of his method.17

Jesus and Buddha are in agreement that humans have to be perfect. It is impossible with men but possible with God. 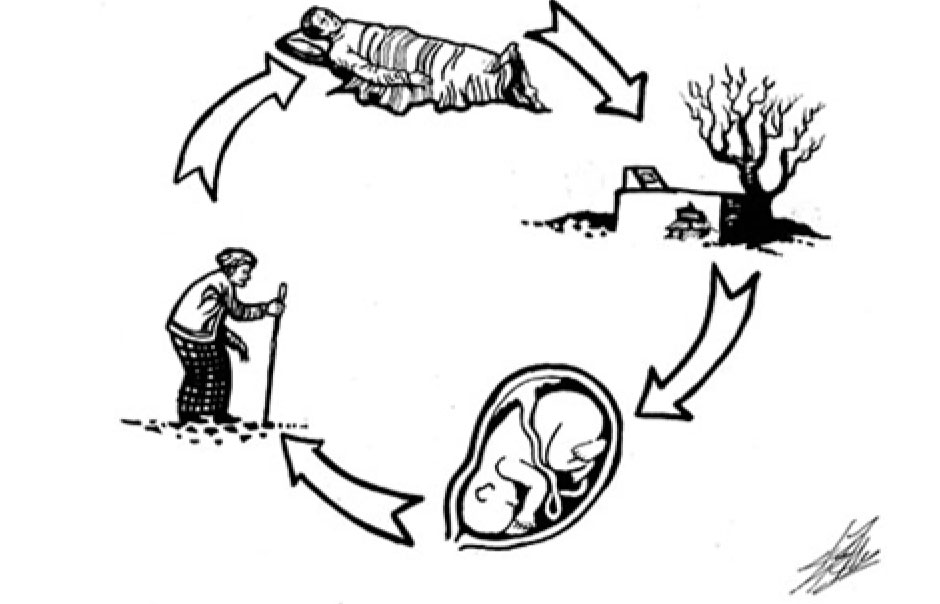 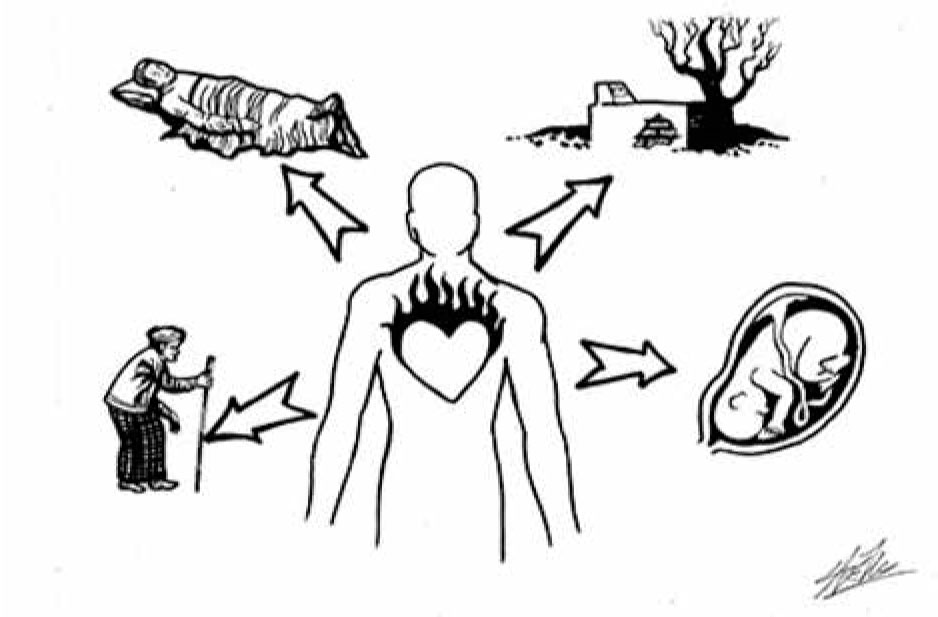 3rd truth: There is a place where suffering and sin no longer exist. “He will wipe every tear from their eyes. There will be no more death or mourning or crying or pain, for the old order of things has passed away.” (Rev. 21:4, NIV) The goal is to go to nirvana. Ni means no, vana means fire or burning. Nirvana is a place of no sin and no suffering.

[Editorial Note: My Buddhist-background friends have redrawn the diagram above in a simplified way, since the average layman would recognize only the general categories into which the abodes can be grouped, rather than all the individual Pali names. Their simplified diagram shows a huge gap between the top of the triangle and nibbana, in order to emphasize the enormous difficulty in reaching there from any one of the planes, according to Gautama Buddha.]

4th truth: The way out of the cycle of sin and suffering is faith in Christ’s death, burial and resurrection. Christ walks the perfect road through his disciples. He makes them perfect in his eyes. “God made him who had no sin to be sin for us, so that in him we might become the righteousness of God.” (2 Cor. 5:21 NIV)

After praying for the sick, the Lawyer reminds persons of peace that there are many stories in Theravada Buddhism about salvation by grace through faith. For example, most are familiar with the story of a man named Angulimala who murdered his father and repented before the enlightened Gautama Buddha.18 The Buddhist background believers announce that Christ is very similar to the Lord of Compassion, the Ari Metteya.19

Not only have the Buddhist-background believers in Myanmar seen a missiological breakthrough among Buddhists, they are also spearheading church multiplication movements among Muslims who have recently embraced the good news. Through them over 400 Hindus have also been  baptized and are worshipping in 70 churches. My trainees from Israel have conducted a signs and wonders training in Asia. Now our networks in Myanmar are reporting hundreds more healings and  even one resurrection. Only Jesus can bring Buddhists, Muslims, Hindus, Christians and  Jews  together  in the body of Christ. All the power in the world cannot break down the walls of religion, but with Christ all things are possible.

When I inquired to why he made this comparison of Buddha’s grace to Christ’s grace the Lawyer stated that according to Buddhism, Buddha has already gone to Nirvana and cannot offer grace for people of today. He could only offer salvation during Buddha’s and Angulimala’s lifetime.

After meeting Dr. George Patterson at a Perspectives class in 1999, Jay Judson was mentored by George for a year at Western Seminary where he learned the dynamics of worship in small house churches as well as how to multiply them in a two-month underground church training simulation. In July 2002 Jay moved to Myanmar, serving as Strategy Coordinator for a Buddhist people group numbering 2.8 million. Within three years he established 252 churches. The movements have now spilled across the borders into surrounding countries.

All illustrations were drawn by Saya Sitthu