This is an article from the March-April 2018 issue: Movements: Learning to Cross the “Bridges of God”

Glimpses through the Fog

See, I am doing a new thing!
Now it springs up;
do you not perceive it?

Glimpsing cows through a fog on an unfamiliar road, one might wonder: “Just how many more cows are there?”

In the mid-1970s, many were stirred to pray for and go to unreached people groups (UPGs) and the 10/40 Window. Despite isolated glimpses of Acts-like movements, not much progress was visible. About 7,000 UPGs remain unreached.[1] Now, credible reports of multiplying movements suggest change is coming, and quickly!

Since 1995, less than 25 years ago, multiplying movements of small, reproducing churches have brought 50 million to faith in Jesus and equipped these new disciples to share their faith and disciple others. And the pace shows no sign of slowing.

In late 2015, researchers estimated about 100 movements globally, consistent with movements verified by on-site visits. By late 2016, this estimate had risen to roughly 130. In May of 2017, Kent Parks reported more than 150 movements to the Lausanne network.[2]

Then in mid-2017, formation of the 24:14 Coalition[3] deepened trust between movement leaders and researchers, and many shared their data for the first time. Credible organizations and networks reported approximately 2,500 movement engagements,[4] including nearly 500 movements[5] that had produced millions of new disciples. As 2017 ended, the count was nearly 650 movements with 50 million disciples! 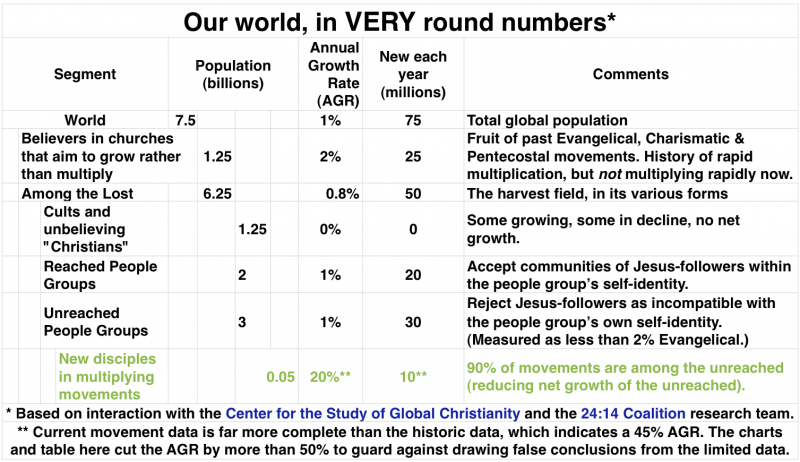 Why the fog, anyway?

Overlapping terms lead many to think of a church planting movement as just faster church planting. In fact movements and church planting are fundamentally different. Church planters typically pour vast energy into turning strangers into “family.” Multiplying movements focus instead on sowing God’s word into groups with pre-existing relationships, like the oikos (households) of the New Testament.

As in the first century, movement ekklesia[6] multiply rapidly without dedicated buildings. Those inclined to associate church with buildings can thus easily conclude movements aren’t real.

A few large, well-known, older movements go back 20 years or more, and have slowed in growth as they got bigger. However most movements are new, smaller, and growing much more rapidly.

Mission leaders have shared these reports in confidence, to guide collaborative strategy. They have good reason to restrict their reports to supporters and trusted colleagues:

Outside funding has killed off many budding movements.

About 15 known movements have fizzled to date, but most continue growing exponentially, and some are multiplying to additional UPGs.

Movements multiply ekklesia faster than they can be readily counted, and terminology and methods for tracking such movements are still emerging. Where on-site verification by a visiting team is impractical, researchers seek detailed reports and independent confirmation.

And at least 90% of these movements are among UPGs!

These movements are present mostly in multiple locations in a few hundred widely distributed UPGs—in 149 of 234 countries (60%), and nearly 80% of Joshua Project’s people group clusters.

Thus, in recent decades, at least 1% of the global population of UPGs have become—not just believers—but obedience-oriented disciples in rapidly multiplying ekklesia!

Thousands of movement engagements have been reported, but for this count of movements the 24:14 Coalition research team includes only credible reports of Level 5 or higher movements.[7]

Thousands more movements are still needed, yet there are many reasons to hope expectantly for their continued multiplication. 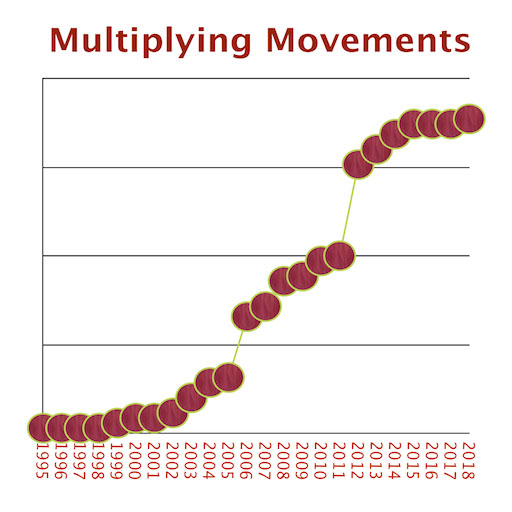 Various factors can hinder the growth of individual movements:

Yet the global movement count will likely keep growing, through: 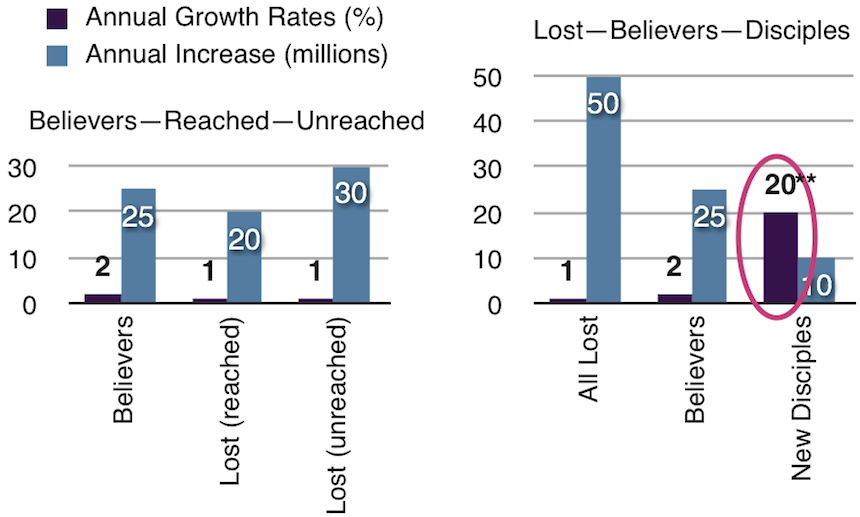 Most believers since the first century have had no option but to live provincial lives—without opportunity to see the unfolding progression of God’s global purpose, or grasp our place in it. We have the unprecedented ability to view recent developments with historical perspective to anticipate what lies ahead.

Christ’s ekklesia was birthed in a prayer meeting—Pentecost. From that event His global ekklesia experienced double digit annual growth (10%+) only once—from 33–50 AD.[10] In that rapid growth, Christ’s ekklesia had no written scriptures or buildings, instead they had just…

daily prayer and fellowship with one another,

the empowering of the Holy Spirit, and

their testimony of Jesus’ life and work in their lives.

Yet by 400AD the church was centered in dedicated buildings and the annual growth of Christians had slowed to less than half a percent (.5%), where it stayed until the 1800s.

Even two hundred years after Martin Luther launched the Reformation, the growth of global Christianity remained below 0.5%. Then, in 1727, a band of 300 squabbling religious refugees from Moravia sought the Lord and experienced revival. Forty eight men and women began a 100-year long, 24/7 prayer meeting, and sent the first hundreds of Protestant missionaries.[11]

In 1738, John Wesley was transformed through contact with Moravian missionaries, and the resulting Methodist movement transformed both England and the United States.[12]

By 1792, access to scattered reports of the religious state of the world stirred William Carey to write a short booklet—An Enquiry into the Obligations of Christians, to use Means for the Conversion of the Heathens,[13] then set sail for India. Carey’s booklet and example stirred a first wave of missionaries to the world’s coastlands, causing him to be credited as the father of modern missions.

Carey’s Enquiry lifted many from a provincial perspective into awareness of God’s global purpose:

In the late 1800s, Hudson Taylor issued a challenge to the interior of China with an effect similar to Carey’s Enquiry. This stirred a second wave of missionaries to the interiors of the world’s continents and fueled the student volunteer movement of the late 1800s and early 1900s. Wesley, Carey and Taylor all contributed greatly to this increase of Christians, from less than a fourth of the world in 1800 to a full third of the world by 1900, and set the stage for the globalization of the Church.

In the 1960s, Donald McGavran launched a graduate school at Fuller Theological Seminary for experienced missionaries to study together how God had worked in their respective fields.[17] This collaborative learning environment yielded many important insights.

In 1974, Ralph Winter drew on these insights to distinguish two different contexts in which non-Christians are found:

Reached People groups (15%) accept believers as part of their people.

UPGs (85%) need a movement before believers will be accepted.

Winter and McGavran urged the launching of movements as God’s means for reaching UPGs, but the problem (peoples isolated from the gospel) was understood and embraced far more widely and rapidly than the solution (launching movements).

Thus, McGavran lamented in 1981 that 90% of missionaries among UPGs were not pursuing movements.[18] A former student of McGavran’s told me McGavran later wished he had advocated church multiplication instead of church growth. 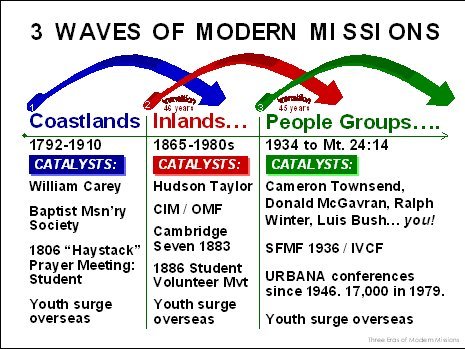 In 1974, to guide believers in embracing God’s global agenda, Ralph Winter distilled insights from this collaborative study of seasoned missionaries into a course that later took a variety of forms:

Alongside the strategy coordinators who were trained during the 1980s and beyond, alumni of these courses have become like Gideon’s mighty men—revealing God’s power through their disproportionate impact.

By the year 2000, perhaps 1,000 missionaries[19] were pursuing God for movements among UPGs. As God blessed their efforts, they learned from each other’s successes and failures, leading to multiplying movements that today may rival or even surpass first century growth.

God reserves a rare depth of fellowship for those who engage in a grand purpose together. Our intimacy with God, and answered prayer, are both tied to bearing multiplying fruit (Jn 15:7–8, 15–16).

I have called you friends, for everything that I learned from my Father I have made known to you (Jn 15:15).

The writer of Hebrews declared:

God wanted … His purpose very clear to the heirs of what was promised …(Heb 6:17).

The distribution of multiplying ekklesia remains very uneven. The 24:14 Coalition invites you to help address this injustice.

Let us press in to know the Lord better by joining Him in His pursuit of no place left (Rom 15:23) where Jesus is not yet preached, known, loved and worshiped.[22]

Take these steps toward becoming a reproducing disciple and fueling this now global development: 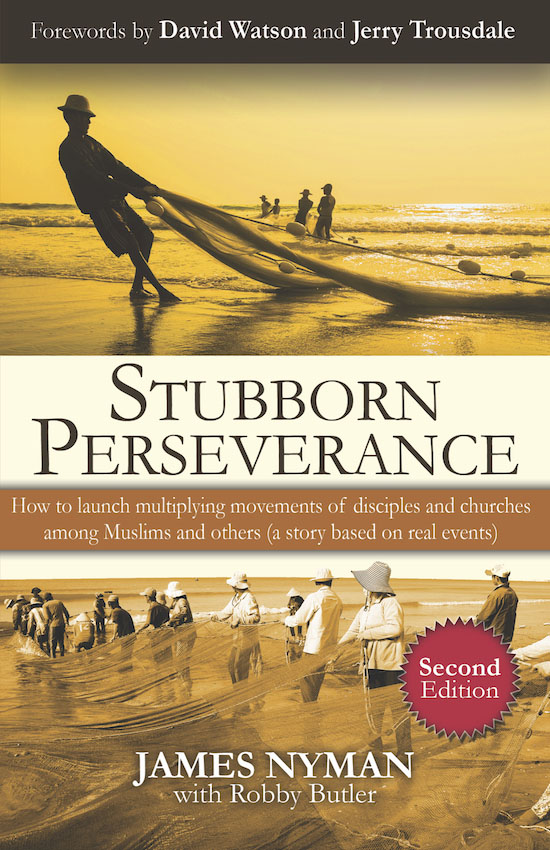 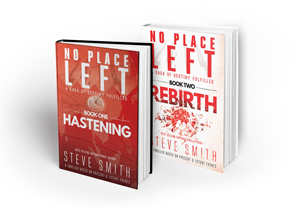 Get a free book and join the learning community at Multiplying Movements (MultMove.net).

[4] Engaged with movement strategy, but not yet reproducing to four generations.

[5] Based on credible reports of 4+ streams replicating to 4+ generations.

[6] Ekklesia is the New Testament Greek word in Jesus’ declaration “I will build my ekklesia” (Mt 16:18). Four English Bibles before the King James translated this word as “assembly,” but the commission for the King James required translators to use “church” instead of “assembly,” apparently to delegitimize gatherings of believers outside the state-owned buildings.

[7] See the “CPM Continuum” at MultMove.net/cpm-continuum

[9] See the YouTube video Traits of Churches that Multiply

[10] Report from the Center for the Study of Global Christianity, entitled “Table BB. Numerical trends in the worldwide expansion of Christianity, AD 30–AD 2200, with special reference to the 1st century AD.”

[16] My estimate is based on published figures for these three movements.

[17] McGavran’s original School of World Mission later opened its doors to aspiring missionaries and became the School of Intercultural Studies.

[18] See “A Church in Every People: Plain Talk about a Difficult Subject” at MultMove.net/church-every-people

[20] T4T: A Discipleship Re-Revolution: The Story Behind the World’s Fastest Growing Church Planting Movement and How it Can Happen in Your Community! by Steve Smith (MultMove.net/t4t).

[21] Watch for books “for movement activists” by Trevor.

[22] See the May/Jun 2016 Mission Frontiers on the No Place Left movement.

I joined Ralph Winter’s “team” at the USCWM in 1980, fresh out of Caltech, so I’ve been tracking developments toward reaching the unreached now for nearly 40 years.

I can’t think of a more positive development for the advance of God’s purposes among the unreached than this contemporary proliferation of multiplying movements of small, rapidly reproducing churches, which equip and motivate contagious disciples to share the gospel and start new churches within their own households, social networks and beyond.

Such contagious faith, obedience and maturity is in stark contrast to the churches I am more familiar with around the world, absorbed with the relatively sterile pursuit of ever-greater knowledge and bloated in size beyond the ability for each member to participate or reproduce.

If this development of multiplying movements intrigues or resonates with you, come visit MultMove.net and grab a review copy of Stubborn Perseverance, print copies of this article in booklet form to pass on, and find other ways we are finding to fan the flame on this new development.

As said this is encouraging, but only a miniscule beginning. - 50 million is a wonderful START.

YET - it must be re-iterated that

This admission is key to leading His Body to conviction, repentance and large scale transformation to Kingdom patterns rather than the tame, passive, spectator based, religious ones.

Let us stress, and declare Discipleship & Lordship are the true indicators of an effective measure of the Gospel in a sinners life -
This will lead to a Global hearted discipleship where His disciples will move OUT of their cultures and transform others in Biblical system of “like produces like.”

Curently there is a need to be honest about the ridiculousness of our structures and forms that are more similar to 2 Tim.3:5 than Acts 2:40-47.

What I believe we are seeing is a sharp contrast between relatively sterile “believers” and contagious disciples. The latter have grown from a few thousand to 50 million in less than 25 years. The available data shows a 45% growth rate (doubling every 2 years), which will rapidly become VERY significant if it continues. However the data is so limited that we have published a 20% growth rate to be conservative.

P.S. I have also made this article available with the footnotes inserted in-line and as a printable booklet at MultMove.net/astonishing-progress