This is an article from the January-February 2012 issue: Can Short-Term Teams Foster Long-Term Church-Planting?

Jesus told us, “Everyone to whom much was given, of him much will be required, and from him to whom they entrusted much, they will demand the more” (Luke 12:48 ESV). By this standard, 21st-century evangelicals (especially in the West) can expect rigorous accountability when our Master returns. In the past two years our stewardship has been enormously increased by the appearance of three remarkable books that inspire and inform new expressions of wise obedience to Jesus’ commission to make disciples of all nations.

In early 2010 we first were entrusted with the Atlas of Global Christianity, edited by a team led by Todd Johnson and Kenneth Ross, extensively documenting the shifts in global Christianity over the past century. Then in October 2010 we received the latest (seventh) edition of Operation World, in which Jason Mandryk and his team have given us country-by-country narratives to help us to pray and act. Now, as we turn the corner into 2012, we have before us The Future of the Global Church, Patrick Johnstone’s delightful new book that beautifully complements the Atlas and Operation World and that pushes us to renewed zeal and creativity.

(Full disclosure: I was part of the editorial team for the Atlas of Global Christianity, I was also part of Patrick’s team for the fifth edition of Operation World in the early 1990s, and I have long been a vocal advocate of Patrick’s work. So if you’re looking for a dispassionate and detached critique of these books, you’ll need to look elsewhere.) 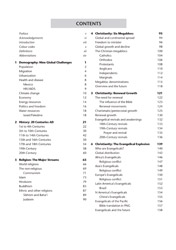 So, where to begin with The Future of the Global Church? The subtitle “History, Trends and Possibilities” gives us our first clue that Patrick utilizes long arcs backward and forward to suggest a variety of possible futures as well as to advocate his own positions and fuel the progress of world evangelization. Patrick is an evangelical optimist who writes “in the face of a prevailing pessimism and creeping universalism.” He combines the synthesizing mind of an analyst with the passionate heart of an evangelist. He liberally sprinkles his text with “Food for Thought” and “Burning Questions” sidebars. His preface declares, “My concern in designing this book is that passion and vision be paramount,” and his introduction specifies the users for whom the book is designed: “Christians passionate about the extension of God’s kingdom,” Christian congregations, disciplers and teachers, mobilizers and missionaries, researchers and academics.

The order in which Patrick lists the intended users points us to some of the comparisons and contrasts between this book, the Atlas and Operation World. The primary authors of these books enjoy warm and collegial relationships with one another, sharing data and sharpening one another’s perspectives. All three books have been prepared by evangelicals, but the Atlas carries a more detached posture directed to researchers and academics of various stripes, whereas Operation World and The Future of the Global Church carry advocacy postures directed primarily to evangelical activists. Operation World is organized primarily around countries and the Atlas around world regions, whereas The Future of the Global Church gives less emphasis to geography and more to ethnic and cultural blocs of peoples. (More on the latter in a moment.) 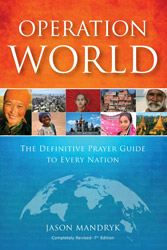 Operation World is the least expensive and is dominated by black-and-white text in paperback form, while the Atlas carries a much higher price suitable for a full-color, large-format reference book with elaborate maps and diagrams. Formatted in the attractive and useful A4 page size, The Future of the Global Church is priced close to Operation World, but, like the Atlas, offers a hardback form and extensive use of color for multiple graphics.  (Take a look at the four sample pages included in this issue of Mission Frontiers.) Whereas the Atlas and Operation World are the products of editorial teams, The Future of the Global Church is, in Patrick’s words, “all essentially the work of one person” and is therefore “likely to contain biases and quirks” that will nonetheless refresh and stimulate many readers. All three books are accompanied by electronic media that extend the print products.

The nine chapters of The Future of the Global Church follow a clear progression. Three foundational chapters on demography, history and religious streams undergird the next three chapters that focus on Christianity and especially renewalists and evangelicals, and then the final three chapters elaborate evangelical emphases on the unevangelized, missions and “finishing the task.” For me (and I suspect for many others) chapter 7 is Patrick’s most distinctive and helpful, for it is here that he more fully unpacks the paradigm (he introduced years ago) in which he presents the world’s array of people groups within 15 Affinity Blocs and approximately 250 People Clusters; these are not mere categories of convenience, but a genuine attempt both to reflect field realities and to highlight ethnic connections conducive to mission partnerships and missiological creativity. Patrick’s commendable emphasis on least-evangelized countries and least-reached peoples (reflected, in part, by his conclusion on “finishing the task”) is counterbalanced by his deep and consistent concern for the re-evangelization of Europe and the strengthening of evangelical foundations in the West.

I have long anticipated The Future of the Global Church, and I am buying copies not only for myself but also for friends. I am delighted that Patrick’s legacy to the Church now includes not only the first six editions of Operation World but also a carefully conceived and beautifully presented “game plan” for world evangelization that seeks to shift proportionately more energies to the world’s least-reached peoples. We have truly inherited an embarrassment of riches, with the accountability to match.f 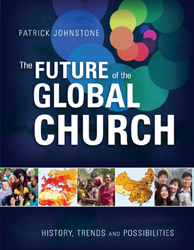 The Future of the Global Church, 240 pages, A4 page size (8.3 X 11.7 inches), hardback, $39.99 retail ($29.99 discount or $23.99 for three or more copies). Published in the USA by Biblica and InterVarsity Press, ISBN-13: 978-1-60657-132-3. Electronic media published by Global Mapping International. See www.thefutureoftheglobalchurch.org and www.missionbooks.org for more information, and see http://www.thefutureoftheglobalchurch.org/usatour to learn about Patrick Johnstone’s January 14-25 tour of five U.S. cities.

How to know when to fit in and when to buck is a great qtosuien.  What I have found is open-mindedness goes a long way to helping you know.  When we drop the pretense that “my” culture is perfect and “their” culture needs improvement is when we can see that both cultures have good and bad points.For me, personally, I have found that maintaining my own style of being and dress has helped me to stand out in a positive way.  I cannot hide here, I tower over most men, so trying to fit in does me no good.  It is my uniqueness that has opened doors for me.I am in a country that runs on soccer, but it is american football that has given me a voice nationwide.  I am a coach and a player in a start up league that has allowed me the opportunity to be on national television, consult with powerful leaders, and share Christ with others.  On a side note, for those looking to go into missions, if you cannot fit in to your home culture, if you feel odd or strange among your own kind, if you have ever been described as socially awkward you may want to reconsider.  The skills that allows one to fit in at home are the same that help them fit in abroad.  I have seen so many missionaries serve ineffectually or leave disillusioned because they thought a change of location would help them relate.

As God called us to preach Gospel and feed the hungry to give drink to the thirst to welcome strangers into our homes to clothe the naked to heal the sick to visit those in prison as we satisfy the desire of the afflicted then shall your light rise in the darkness.

Grace to you and peace from God our Father and the Lord Jesus Christ.
This is to introduce to you Humanitarian Evangelistic Courageous Association (HECA ).

This is to confirm that HECA is a certified church organization based here in Ghana Kumasi in the Ashanti Region.
We had a church here in Kumasi a place called Afari a deprived community,we also had an indigenous churches in the Northern Region of Ghana.Animist areas,be side that,we had an Orphanage Home here in Kumasi and these children’s attend church in the some church HECA Community Church here in Afari.

In view of this, i would like to solicit for partnership,as far as the Great Commission is concern let us come together to win more soul;s into the kingdom of God.I do hope that,you people don’t have a Branch here in Kumasi and i wish that if you can able to use HECA COMMUNITY CHURCH as one of your Branch partners for compassion International we will be appreciate.

I would ask you to give serious consideration to the urgent request for Assistance in such a worthwhile and laudable cause. I enclosed here with a few photos for you to see or you can able to send some teams to come and verify
them whether it is true or not.Thank you for the interest you have shown to this collaboration team work.
HECA is a church Humanitarian Organization dedicated to working with Children,Youth,Families and their Communities to reach their full Potential by tackling the causes of poverty,Crime and Drug Addiction by introducing
Health relationship,education,hope and Business Activities to keep the disadvantaged Children and Youth from turning to Crime and Drug abuse through a Holistic Approach,programme based upon the Gospel of Jesus Christ.
Yrs in Lord’s vineyard,
Rev.  Joseph ( Senior Pastor )  Tel:+233-2756580
L HAVE DECIDED TO HANDED OVER THE CHURCHES TO YOU,IF YOU DECIDED TO TAKE OVER I AM READY FOR THAT.

Hello.This post was really fascinating, particularly since I was browsing for thoughts on this matter last Thursday. zotrim http://www.zotrimslimming.net