It was in the 1960s and 1970s that Christian researchers began in earnest to identify the people groups of the world. When the original lists were made, there was limited communication and very little movement of peoples. At that time, an international flight may have cost 10 times what it does currently and taken much longer. An international telephone call typically cost several dollars per minute. The common way to stay in touch with people in other countries was often by hand- written postal letter.

Geographic distance was a significant barrier to the spread of the gospel. Diaspora groups had minimal contact with homeland populations; the homeland and diaspora peoples of the same ethnicity were considered distinct entities. People group populations were structured accordingly, and people groups were defined by including country boundaries as shown in Figure 1 below. That data structure has served the mission community well for the last 50 years. Figure 2 illustrates the traditional people group data structure and counts as presented on the Joshua Project website. 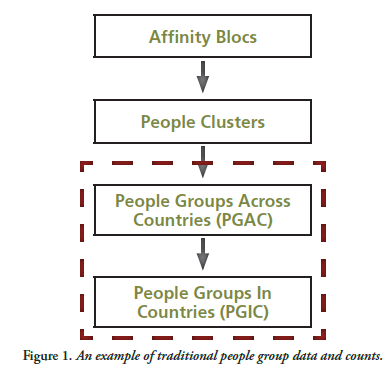 However, the world is a very different place than when people group lists began. Travel is relatively inexpensive and rapid... we have virtually free and instant video connection... money can be sent with a few taps on a phone... family or associates can Facetime or Zoom anytime... business or ministry can be conducted remotely from another continent.

Globalization means anyone can essentially contact anyone, anywhere, anytime. The geographic barriers and “distance” between the homeland and the diaspora have significantly blurred. Migration means people are on the move with unimagined mobility. New people-groups- in-countries (PGICs) are formed whenever a homeland group moves to a new country. All this raises challenges and concerns related to the current people group terminology, data structures and presentation. 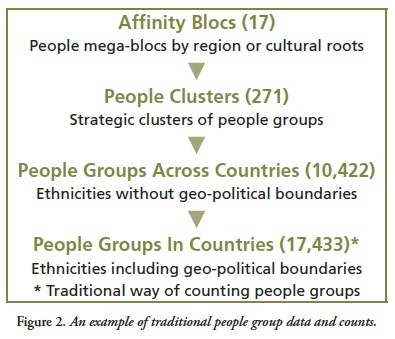 3. PGICs are weighted the same—The largest homeland groups and the smallest diaspora groups are considered at the same level when viewed at a PGIC level. They have equal weight as database entries. Each is considered a unique “people group.” For example, the nine million homeland Kurmanji Kurds in Turkey are counted the same as a few thousand diaspora Kurmanji Kurds in Norway.

4. Mixes geography into the hierarchy—Traditional geographic barriers to the spread of the gospel are diminishing. Fifty years ago, geography was considered in the hierarchy of people groups, but this may have contributed to "silos” of ministry focus at the country level and may be less helpful in today’s world. 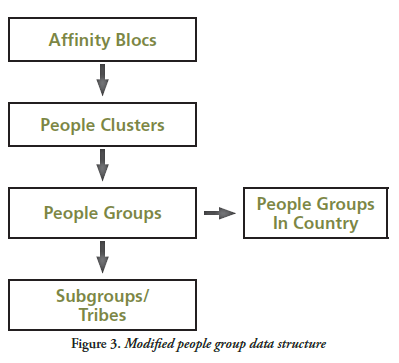 Data modeling suggests the elements in a hierarchy ought to all be of the same “stuff”. Separating geography from the people group hierarchy may be helpful. Figure 3 shows a slightly modified people group data structure.

The perspective change in Figure 3 is relatively small, but addresses the four concerns above: