The Poor Do Not Always Have to Be With Us

Is there any hope of eliminating extreme poverty in our world? Trillions of dollars have been spent in the U.S. and around the world to eliminate poverty and yet poverty in Africa is still a tenacious reality. After spending $15 trillion on the “War on Poverty” starting in 1964, the poverty rate in the U.S. has only decreased by four tenths of one percent to 10.1% today. At first glance it seems hopeless, but there is now abundant evidence for what works and what does not in overcoming poverty. In this issue we will reveal to you what works in defeating poverty.

There is one thing that the global anti-poverty industry is slowly beginning to realize: aid is not enough. Aid alone will never defeat poverty. Aid alone will only create people dependent upon ever more aid and less able to support themselves. Poverty will only be overcome when people are able to support themselves without outside aid. The movie, Poverty Inc., www. povertyinc.org, does a great job of chronicling the many failures of global anti-poverty efforts to make a lasting impact in the lives of the poor. There are many instances where outside aid actually hurts the poor by undercutting local markets, thereby making the poor even more dependent upon outside aid for their survival. In desperate situations where people are starving, aid is essential and must be provided. But aid is not a long-term solution to poverty. Aid, supplied too long to people, will actually keep the poor trapped in poverty.

The country of Haiti is a prime example where aid alone has failed. Possibly, no single country on earth has received more international aid than Haiti and yet they are still desperately poor. The movie, Poverty Inc., explains how good intentions of outside organizations to alleviate the desperate poverty in Haiti have gone so terribly wrong. In the midst of this human tragedy there are indeed examples of Haitians lifting themselves out of desperate poverty by starting their own businesses and even creating new jobs by hiring others. The solution to poverty lies in empowering people to lift themselves out of poverty.

Have we made any progress in combatting poverty? Yes, as Peter Greer says in our lead article, “Just two hundred years ago, almost the entire world’s population lived in extreme poverty. Today, it’s less than 10 percent. In the past forty years alone, the percent of people living in extreme poverty has dropped by over 30 percentage points.” (Extreme poverty is defined here as living on $1.90 per day or less.) This dramatic reduction in extreme poverty is even more remarkable when you consider that world population has increased seven-fold over the last two centuries. Without very significant economic growth, a population increase such as this would naturally force untold millions into greater depths of extreme poverty as the available resources would be divided up between ever growing numbers of people. Yet the exact opposite has happened. As the world population grew exponentially, the global economy grew even faster as mankind entered the greatest period of innovation and technological expansion the world has ever seen.

This progress dramatically increased after 1950 when 72% of the world still lived in extreme poverty. By 1981 it was down to 44%. Since then global economic growth has accelerated bringing the global extreme poverty rate down to below 10%. This makes the last 37 years the single greatest period of global poverty reduction the world has ever seen. If this trend continues, extreme poverty could be a thing of the past in the near future. See the chart on the next page, courtesy of www. ourworldindata.org/extreme-poverty, to see this dramatic trend over time.

It would be easy to assume that the economic revolution in China since 1989 is largely responsible for this rapid reduction in extreme poverty over the last four decades. While China’s embrace of a modified form of capitalism has indeed lifted hundreds of millions of people out of extreme poverty, even without the influence of China’s growing economy the downward trend in global extreme poverty would still be intact. So what explains this dramatic reduction in global poverty rates? What clues can we garner that will enable us to finally defeat extreme poverty?

WHAT IS THE ANSWER?

There is no single solution to poverty. Poverty is a multifaceted problem and the solution is multifaceted as well. The article by Jay Richards, How Cultures Move from Poverty to Prosperity, starting on page 14, provides the top ten societal conditions that lead to prosperity. The listing on pages 20-22 from Barry Asmus and Wayne Grudem’s excellent book, The Poverty of Nations, provides a more comprehensive listing of 78 societal conditions that help a people to grow from poverty to prosperity. Not all 78 are required in order for a society to prosper but the more that are present in a society, the more likely that society is to overcome extreme poverty. There are also some conditions without which prosperity is impossible, such as an effective system of legal records and protections for land owners. A single problem like government corruption can keep people in poverty. It doesn’t take much to keep people poor.

So what are some of the reasons for the recent drop in poverty? The industrial revolution starting in the mid-1800s did have a global impact in reducing poverty as the production of various goods became more efficient. But 100 years after the start of the industrial revolution, 72% of the world still lived in poverty. Certainly, two world wars were not helpful in reducing poverty. Real poverty reduction started after WWII. We have now gone 73 years without the destruction of a major global war.

Secondly, the greatest period of poverty reduction in history also coincides with the greatest expansion of computer and cellular phone technology the world has ever seen. Poverty reduction got into high gear after 1981 when the personal computer age was just getting started. The computer age has given birth to the internet, the world-wide-web, smart phones, tablets and more. This revolution has dramatically increased the productivity of billions of people. During this same period of time you have dramatic improvements in transportation, communications, manufacturing and trade. There is not a single sector of our global economy that has not been transformed by the revolution in computer and cellular phone technology. All of this progress was not the invention or brain-child of any government program or bureaucracy, but the result of the innovation and persistence of gifted people who were free to pursue their visions for a better way of life. This is the ultimate cure for poverty—billions of free people who are free to pursue their dreams and visions for a better life using the tools that other free people have created. Governments can support and encourage this process of innovation and entrepreneurship but they cannot replace it with top-down central planning and control. It simply does not work. We know what reduces poverty. We just need enough faith in the cure to apply it and not allow ourselves to be drawn back into the failed economic systems of the past. 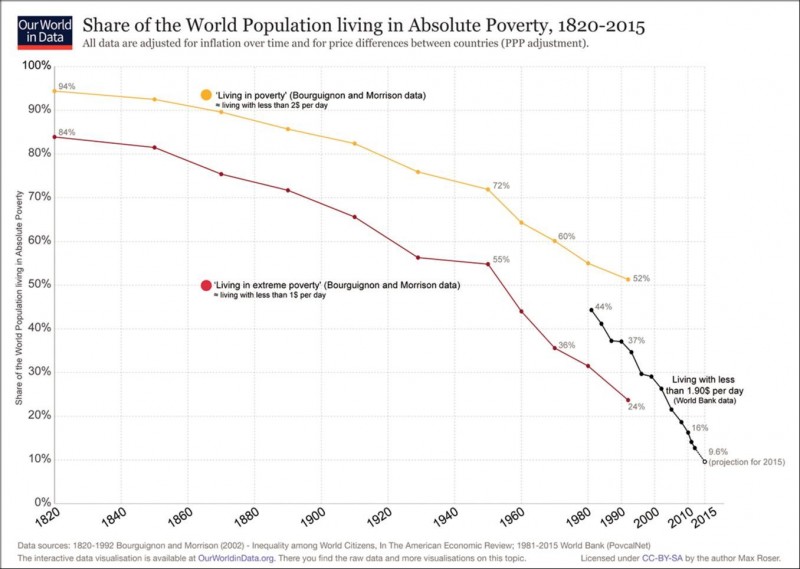