Students Stirring on the West Coast

In our role as mobilizers we desire to see the message of God’s glory among the nations being brought to each new successive generation. Typically the place where the world of missions and the university have crossed has been at the triennial Urbana conference in St. Louis, Missouri. Other ministries, like The Traveling Team, have traversed the U.S. university circuit to mobilize students into God’s global mission. The Traveling Team holds their summer intensives on our campus each year and we have benefited from the mutual exposure to each other’s ministry. New groups like the Circuit Riders and Movement 133 have recently come on to our radar. These groups are opening up new opportunities for the mobilization message to make inroads into new streams, especially here on the west coast of America.

This summer the Circuit Riders, and some other collaborative partners, completed a circuit tour they called “March to May Day.” During this tour they visited 22 college campuses all along the California coast and gathered more than 4,000 students. This past May 1-3 was the culminating gathering in downtown LA. It was called ONELOVE: MAYDAY. Kicking off the first night was Banning Liebscher. He encouraged the students present with the importance of servanthood. There was a sense that a foundation was being laid for the future of a healthy and vibrant movement that could eventually touch nations. The next night, Francis Chan captivated the crowd by recounting Christ’s experience in the Garden of Gethsemene, and the need for the students to understand the crazy love of the Father. Brian Brennt brought the closing message on Saturday night on the power of mercy. The team remarked that they had never heard a message specifically calling for a love revolution in America that would embody the mercy of Jesus. 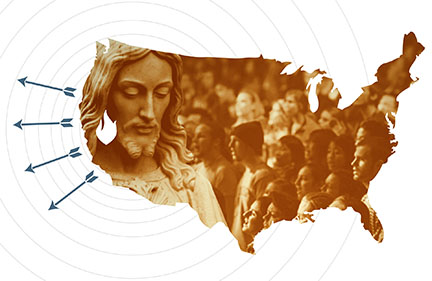 The next event is being held July 13-Aug 3, 2014 on the campus of the U.S. Center for World Mission in Pasadena, CA. It is called “21 Project.” The gathering hopes to draw a core group of the students from all over the West Coast who participated in the March to May Day events for three weeks of training, gathering, and mobilization. The “21” conference is intended to equip these students to and be a life-altering experience that prepares them to continue on a path of friendship with Jesus, collaboration, and societal transformation.

In the mornings, those participating will all be together undergoing training in what the team calls “the cultures of Jesus.” In the afternoons they will break out into customized tracks for specific and practical skill set applications. Evenings will be spent together for explosive nights of worship and inspiration from what are said to be “some of the great spiritual fathers and mothers of our time.” Throughout the three weeks, the teams will seek to share transformative, box-breaking experiences to expand hearts for Jesus and their understanding about how to develop and grow.

The dream of this “21 Project” team is to see a new awakening in America. They believe, like many, that college campuses are the key. If they see a realization of their dream, we know from history that a missions renewal movement that touches the nations will not be far behind.

John is a product of God’s grace through prayer and revival. He has ministered in over a dozen nations and served with his family among the Isaan people of Northeast Thailand before arriving at the U.S. Center For World Mission in 2012.