This is an article from the Jan-Feb 2022 issue: The Changing Shape of People Group Strategy

People Groups and the Bible

Human Grouping in the Old Testament

The Old Testament portrays the people of the world with a diversity of terms that describe very large human groupings to relatively small sub-groups or segments of them. The largest human grouping would be humankind without distinction, as in Genesis 1:26, “Let Us make man (םָדָא, adam) in Our image”1 and 6:5, “Then the Lord saw that the wickedness of man (adam) was great on the earth.” In these cases, adam refers to “humankind, mankind, a class of being created by God without regard to sex, with a focus as a class of creature, distinct from animals, plants, or even spiritual beings.”2  Another example is in Genesis 11:1, “Now the whole earth (ץֶרֶא, eretz) used the same language and the same words.” This is an anthropomorphic use of eretz to refer to all humankind.

The next layer of human grouping found in the OT is the idea of nations or peoples. It is well known that יֹוּג (goy) and םַע (am) are the most common words for nations/peoples. In one dictionary they are defined similarly as “a people group sharing. a common ancestry and/or sociopolitical identity” with an addendum for am, “also used for groups of people smaller than a nation, such as the inhabitants of a city.” Note the phrase “people group” in the very definition and the variety of group size the word am covers. Goy indicates “a common sociopolitical identity that can be defined by ancestry, language, land, and government… as Israel’s national identity becomes more clear  in the OT the majority of the occurrences use some form of the plural to refer to the surrounding non-Israelite nations.”3 Thus goy can be applied to human groupings defined by a diversity of affinities/ boundaries (ancestry, language, land, government) and became synonymous with non-Israelite Gentiles. In the Septuagint, goy is usually translated as ἔθνος (ethnos), while am is generally used to denote God’s people Israel and is usually translated as λαός (laos).4

The fact that language was a major defining element of nations and peoples can be seen in Daniel. Seven times reference is made to “peoples (am), nations (הָּמֻא ummah) and men of every language (ןָּׁשִל lishan)” (3:4, 7, 29, 4:1, 5:19, 6:25, 7:14). It would seem fair, in a very general sense, to equate the modern term “ethnolinguistic” to this level of grouping, especially since the OT is full of specific examples of such, both small (Kenites, Kenizzites, Jebusites, etc. of Gen. 15:19-21) and large (Assyrians, Babylonians, Egyptians—Israel’s major enemies).

A third and smaller layer of human groupings can yet be found. In Genesis 12:3 we read, “And in you all the families (הָחָּפְׁשִמ mishpachah) of the earth will be blessed.” Although mishpachah has a wide range of meanings (people, kingdom, tribe, clan, family, group, genus, kind)5, the overwhelming majority of its occurrences in the OT are translated as “clans” (NIV, 253 of 296 occurrences) or “families” (NASB95, 289 of 303 occurrences).6 The word refers to “a family group larger than an individual household but smaller than an entire tribe.”7 Another example of such grouping is found in the account of Achan in Joshua 7:14-18, where God first chooses the tribes (טֶבֵׁש shebet), then the families (mishpachah), then the households (תיִַּב bayit), and finally Achan himself. The people of Israel in the Bible are thus presented in segmented groupings and the references to such (tribes, families, households) in the OT are numerous. A good example of these distinctions is found in the phrase “families (mishpachah) of the nations (goy)” in Psalm 22:27 and “families (mishpachah) of the peoples (am)” in Psalm 96:7.8 As early as Genesis 10:5, 20 and 31, the descendants of Noah’s sons are each described in terms of families (mishpachah), languages (lishan), lands (eretz) and nations (goy). In this case there is a mixture of terms representing smaller (mishpachah) and larger (lishan, eretz, goy) groups.9

Human Grouping in the New Testament

The NT contains a similar diversity of words to describe humanity. The top layer once again consists of humanity as a whole, such as John 1:26, ““Behold, the Lamb of God who takes away the sin of the world (κόσμος kosmos)!”10 Also Luke 2:1, “Now in those days a decree went out from Caesar Augustus, that a census be taken of all the inhabited earth (οἰκουμένη oikoumene).” In both cases, the “world/ earth” is a reference to all the people in the world.

The next layer of human grouping can be seen in the use of ethnos, nation or people, which is the NT equivalent of goy. Importantly, “in the majority of NT occurrences . . . it appears in the plural and takes on a more technical sense that is usually translated ‘Gentile,’11 contrasting non-Jews with Jews.”12 These first two layers of human grouping can be seen in Matthew 24:14, “This gospel of the kingdom shall be preached in the whole world (oikoumene) as a testimony to all the nations (ethnos), and then the end will come.” Another word of note is laos, in significant ways the NT equivalent of am. While the singular form normally refers to the Jewish people it is often used for non-Jews in the plural, as is the case in Rev. 5:9, 7:9, 11:9, 13:7 and 14:6, all of which refer, in differing order, to nations (ethnos), tribes (φυλή phyle), peoples (laos) and tongues/languages (γλῶσσα glossa).13 These phrases are used to describe the entire breadth of humanity in all its forms and varieties. The word phyle is used whenever the   NT   speaks   of    the    tribes    of    Israel.   In Revelation it takes on an eschatological sense and “means generally people (as an ethnic collective).”14 As for glossa, in addition to its basic meaning for the tongue, “it could denote a particular language (Acts 2:4) and could thus be used as a distinguishing mark of a people group (Rev 7:9).”15

The tribe, clan/families, household segments in the OT are not as clearly defined in the NT, not because they ceased to exist but because they simply were not as prominent in a nation subjugated under Roman rule. The tribe, clan or extended family was usually designated by πατριά (patria), as in Luke 2:4, “Joseph also went up from Galilee … because he was of the house and family (patria) of David.” Similarly, συγγενής (syngenes) is used to describe the idea of extended family relatives, “And behold, even your relative (syngenes) Elizabeth has also conceived a son in her old age” (Lk. 1:36). But the main social unit in the NT is the οἶκος (oikos), the house or household, an equivalent to the OT bayiṯ. In Acts 16:31, the Philippian jailer is told, “Believe in the Lord Jesus, and you will be saved, you and your household (oikos).” In Mark 6:4, these segments are put together, “A prophet is not without honor except in his hometown and among his own relatives (syngenes) and in his own household (oikos).”

This table  (Table 1—not exhaustive) summarizes this overview of how human groups are described in the biblical record. 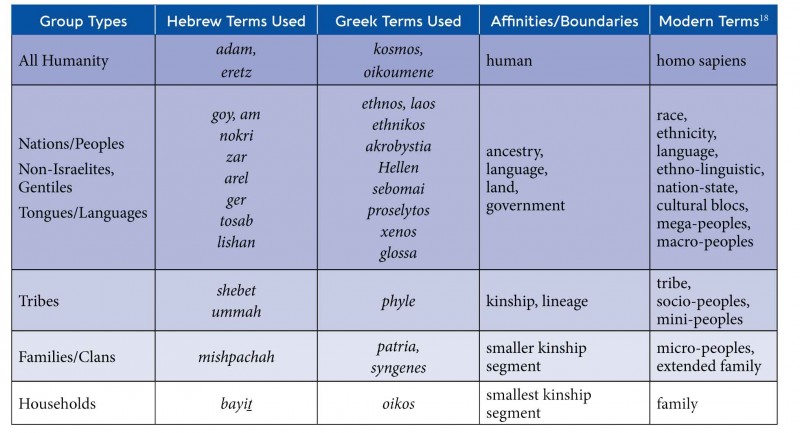 Biblical writers understood 1) the basic unity of all humankind, 2) human difference based on various and diverse affinities/boundaries that created separate nations/peoples (horizontal segmentation), and 3) segmentation within each nation/people based on kinship/lineage (vertical segmentation).  I believe the overview of Scripture above shows that people groups are an ancient phenomenon and were not introduced by people group proponents in the twentieth century.17 People are always seen as members of such a variety of groups that many terms are needed to fully explain the sub-sets and segments. The Bible highlights this “groupness” in its universal treatment of humanity. Biblical authors understood these human groupings in all their variety and complexity; a mosaic of nations/peoples, languages, tribes, clans and households.

Dave Earl Datema (.(JavaScript must be enabled to view this email address)) serves as Missiology Catalyst for Frontier Ventures. He has served in. various roles within Frontier Ventures since 1999. Dave is married with four children and lives in Pasadena, CA.